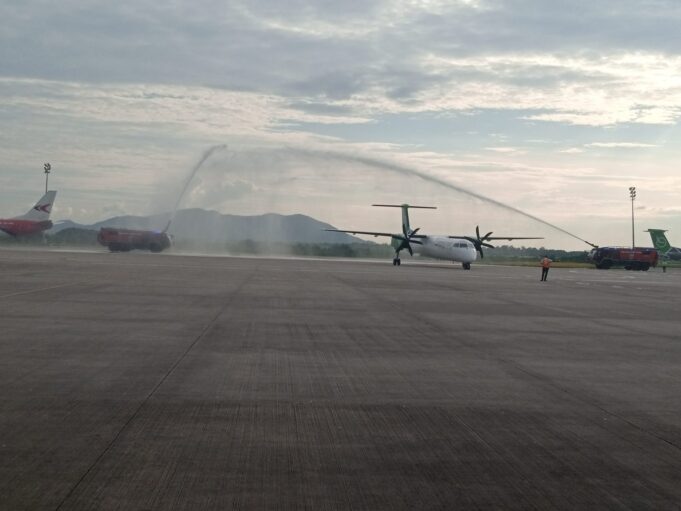 The Nigerian registered aircraft owned by UMZA Air would be operated by Aero Contractors under a joint venture agreement between both parties.

The Dash 8 aircraft is one of the most fuel efficient and modern aircraft in the market and has a capacity of 74 seats.

Managing Director of Aero Contractors, Capt. Abdullahi Mahmood, after taking the delivery of the new aircraft, said Nigerians ought to expect efficient, prompt and reliable services “when the airline resumes operation soonest with the second Dash-8Q400 Bombardier.”

Mahmood, who was represented by Mr. Daniel Adah, the Head of Aero Contractors Security, said the 75 capacity aircraft was very dependable due to its fuel efficiency.

“So with this, we hope to meet aviation demand in terms of passengers and also cost because we have noticed that cost is actually a concern for a lot of travelling passengers.

“So, we believe when you operate a fuel efficient aircraft, you will be able to fly passengers with a reasonable fare, so that is what we are looking at for the passengers,” he said.

The managing director said that the airline was still expecting three more aircraft before the end of October.

According to him, the airline can comfortably commence operation with the six aircraft it has right now, when it is through with Nigerian Civil Aviation Authority (NCAA) audit process with clearance.

“Once you have more aircraft, it gives the passengers leverage for a lower fare because once you have few aircraft with so much demands, then the price will go up.

“We are looking at better services and a little bit if low fares, so at the end of the day, we should not also cut ourselves short because of the operating cost.”

According to him, the nation needs at least 30 to 35 aircraft flying daily in the entire airspace to make sure that all passengers’ needs are met and the tickets are not expensive.

“So, I think the second coming of this aircraft shows that there is room for investment and I believe investors will key to what Umza has done to invest into the aviation industry to make it grow.

“The cost of tickets is a factor of so many things but the major one is the cost of JetA1. Another thing that will drive down the cost is the availability of the seats available to fly.

“If we have a lot of seats available, then the tickets will come down,” he said.

Mr. Mohammed Abubakar, the Chairman of Umza Aviation Services, who is the owner of the aircraft said the five aircraft cost $50 million.

“So far so good, we have received two out of five aircraft and we are expecting three. We have not started working for now; we are still studying the situation and planning.

“So hopefully at any moment, we may start flying. Almost $50 million was invested in the purchase of the five aircraft.

“The aircraft are not on lease, it is an outright purchase.

“This is a risk worth taking. In a couple of weeks, we will start operating based on our agreement with Aero, while we are processing our AOC.”

According to him, business decision depends on individuals to take risk.

Abubakar, who described DASH-8Q400 aircraft as one the safest aircraft, said that the difference between it and Boeing 737 was just 10 minutes.

According to him, DASH-8Q400 aircraft was also one of the safest aircraft because it hardly crashes as it has short landing and short take-off which is very good even during emergency.

“Also, if the aircraft you are using does not consume too much of the Jet A1, then you can drive down the cost which is why the choice of Dash-8 Q400 is a good one.

“Any aircraft that does not consume too much fuel and will deliver the same product to the passengers, will be a welcome development to investors because it will consume less fuel.

“You can afford to sell your ticket a bit less because you are consuming less fuel,” Abubakar said.