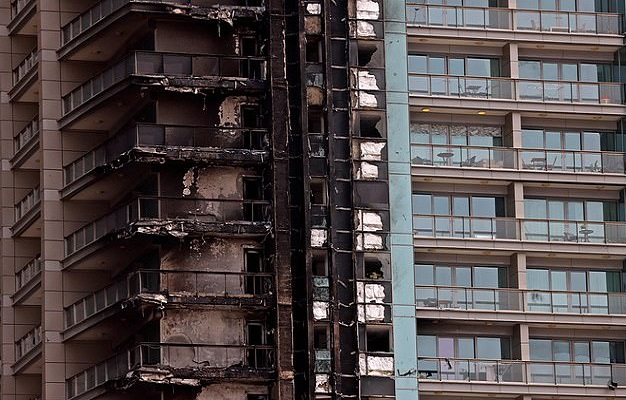 Fire, in the early hours of Monday, ripped through each floor of a 35-storey building close to Burj Khalifa in Dubai, the United Arab Emirates (UAE).

It was learnt that the inferno started at about 2 a.m. before spreading through the block, which is part of a complex of towers called 8 Boulevard Walk, built by the state-backed developer Emaar.

Footage showed flames engulfing an entire corner of the building from top to bottom.

The fire was however put out at about 3:45 a.m. on Monday morning as black scorch marks could be seen scaling the 35-storey building.

Speaking on the incident, Bindu Rai, who lives opposite the building, said: “My mother woke up when the fire started as her entire room was lit up.

“My building faces Boulevard 8 and from what appeared to us, the cladding on the left side of the building was on fire from top to bottom.

“Fire had spread inside two apartments that were somewhere mid-way. For the rest of the building, it was limited to the exterior.”

Bindu added that she was debris tumbling to the ground at one point, as well as firefighters and emergency crews at the scene.

Authorities have yet to confirm if anyone was injured as of press time.

The fire outbreak is the latest in a series of fires in towers in skyscraper-studded Dubai in recent years, reviving questions about the safety of the buildings and cladding used in the country.

On New Year’s Eve in 2015, a blaze engulfed the Address Downtown, one of the most upmarket hotels in Dubai, also near the Burj Khalifa.

Numerous blazes in Dubai buildings in recent years have raised questions about safety, with concerns over materials used in construction.

In April, a large fire erupted at the Swissotel Al Murooj Hotel.

No one was injured in the inferno.

Kogi govt: EFCC out to tarnish our image with media trial