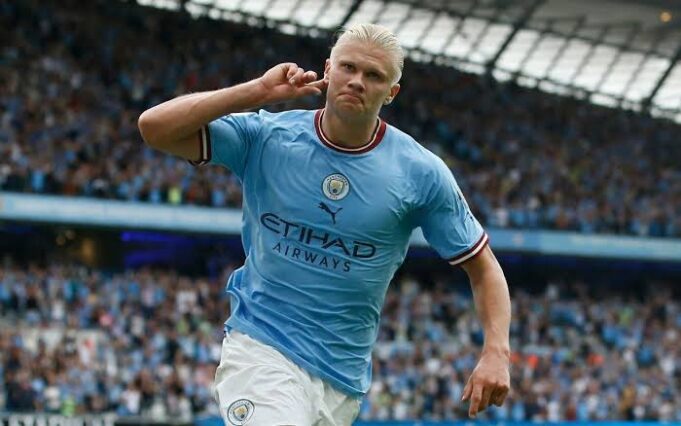 Erling Haaland, on Saturday, scored again as Manchester City moved to the top of the Premier League table with a comfortable 3-0 win over 10-man Wolves.

Jack Grealish opened the scoring in the first minute of the game before Haaland doubled the advantage soon after with his 11th Premier League goal of the season in just his seventh appearance in the competition.

Wolves’ problems were compounded when Nathan Collins was sent off for a wild and dangerously high challenge on Grealish that left Bruno Lage’s side with the unenviable task of facing the Premier League champions for an hour with 10 men.

Phil Foden’s second-half finish from Kevin De Bruyne’s assist – his second of the game – made it an easy afternoon’s work for Pep Guardiola’s team who remain unbeaten, the three points having also moved them ominously to the top of the Premier League table.

Manchester City are currently unbeaten in 22 away games in the Premier League, a run started just over one year ago against Leicester City. It extends the longest away unbeaten run in the club’s league history.

Wolves have won just one of their last 14 Premier League matches, scoring just two goals across their last six matches.

Haaland has however become the first player in Premier League history to score in each of his first four away games in the competition.

He has scored 100 goals in his last 99 games in all competitions since leaving RB Salzburg in January 2020.

VIDEO: No big deal, I slept with dog ― Lady

At Fayose’s wedding: Makinde warns Nigerians not to die for politician