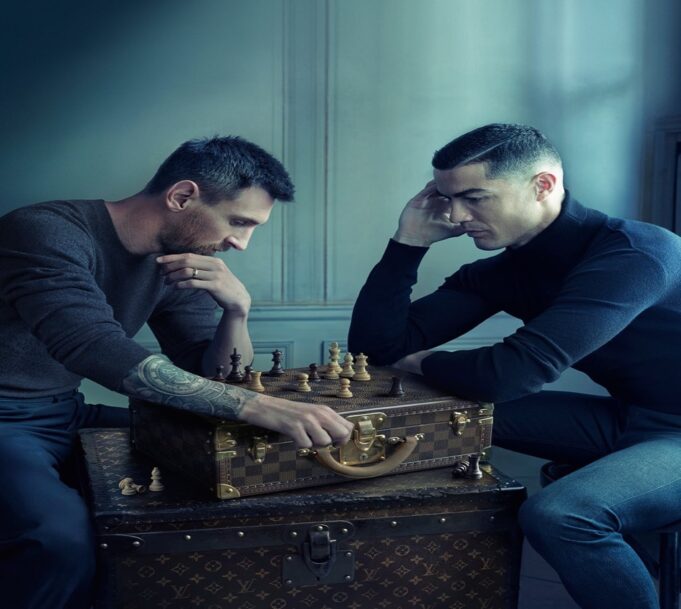 Football stars, Lionel Messi and Cristiano Ronaldo, on Saturday broke the internet as the two appeared in a new Louis Vuitton advertisement playing a game of chess.

The soccer’s biggest rivals appeared in the latest brand campaign tagged, ‘Victory Is a State of Mind’, and was photographed by Annie Leibovitz ahead of the opening day of the 2022 FIFA World Cup in Qatar on Sunday.

Messi and Ronaldo, in the advert, appeared staring intently at chess pieces placed on the checkerboard canvas of a Louis Vuitton Damier attache case.

The football stars both shared the advert on their social media accounts.

“Victory is a State of Mind. A long tradition of crafting trunks photographed by Annie Leibovitz for LouisVuitton”, Messi and Ronaldo wrote on their social media accounts.

The players have dominated football for more than a decade.

Between 2008 and 2017, Messi and Ronaldo claimed every Ballon d’Or, the award given to the world’s best male footballer.

Messi has won it twice more since then, while both men played for Spanish teams from 2009 to 2018.

Messi will attempt to lead Argentina to victory for the first time since 1986, while Ronaldo is hoping to help carry Portugal to its first World Cup win, despite his controversial rift with his club, Manchester United, in Qatar.

The competition which begins tomorrow will end on December 18, 2022.

#EndSARS protester who testified before panel macheted in Lagos – SAN