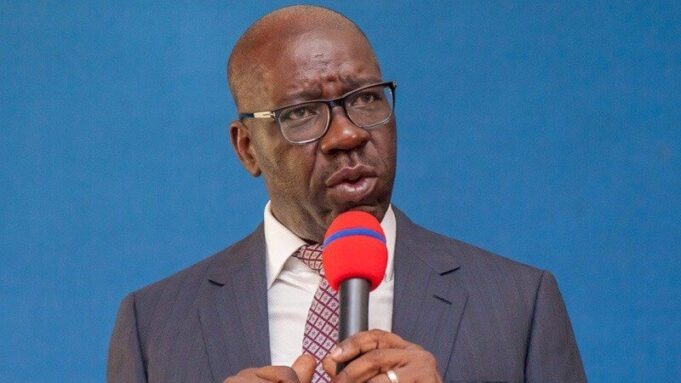 The Edo State Governor, Mr. Godwin Obaseki, on Tuesday, said over 120 security personnel have been deployed to forests in the state, particularly the Ovia Forest to dislodge criminals from the area.

Obaseki disclosed this after presiding over the February Security Council meeting at the Government House in Benin, the state capital.

He said the council was working to deploy more security personnel to other forests across the state to prevent criminals from migrating to places that are currently enjoying peace.

The governor revealed that Edo State had an impressive drop of incidence from about 170 in January to 46 in February, noting that the state Security Council has been working to ensure the security of lives and property in communities where farmers/herders clashes are prevalent.

“We have deployed over 120 security personnel to dislodge criminals from the Ovia axis of our forest. We got information that criminals are trying to come back, but we have redeployed more security personnel. We are working on how to completely flush them out of Edo State,” Obaseki said.

The governor added that the state Security Council has resolved to immediately begin the arrest and prosecution of owners of unregistered vehicles, as well as vehicles with covered number plates in the state.

On his part, the Edo State Sector Commander of the Federal Road Safety Corps (FRSC), Henry Benamaisia, said the agency has discovered that some criminals move around the state with unregistered plate numbers, adding that the “state government has set up a task force to arrest offenders starting from today”.

He added that the Federal Government through the FRSC has approved 5,000 plate numbers for Edo State, saying: “All plate numbers must not be covered but opened as security agencies from this week will embark on a massive operation to arrest offenders.

“Speed is a major cause of accidents and deaths on our road. Consequently, the governor has given us the mandate to arrest any commercial bus driver not using the speed limit device.

Speaking on the successes in ridding the state of kidnappers, the Edo State Commissioner of Police, Philip Ogbadu, revealed that between January and February 2022, the command has arrested several suspects including three persons on the police wanted list since June last year, while three AK 47 rifles were recovered from the suspected kidnappers.

Also speaking, the Edo State Attorney General and Commissioner for Justice, Oluwole Iyamu, SAN, explained that after a meeting between the governor and the EFCC in Edo State, the state has resolved to develop a coordinated approach to put an end to cybercrime in the state.

“From the data presented and correlated by that of the state, it’s clear that large numbers of youths are engaged in this act. The age bracket involved in cybercrime is from 15 to less than 30 years, and prominent among them is dating scams, which is about 80 to 90 percent of the cybercrime activities in the state.