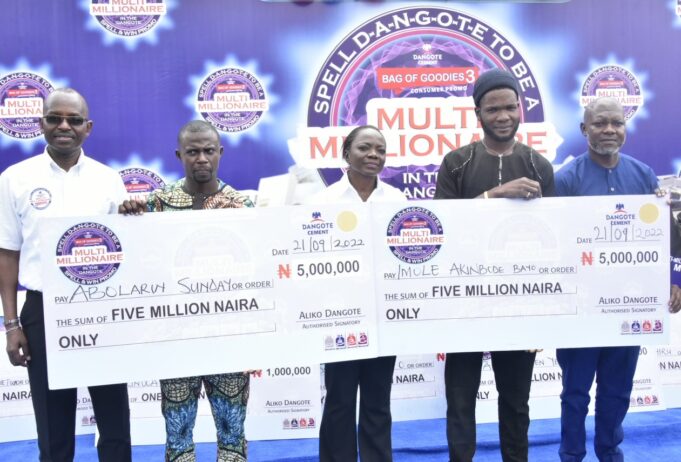 No fewer than 60 people have emerged winners of Dangote Cement promo in the North-East region of the country and Ogun State.

While the lucky winners were awarded in Jos, the Plateau State on Thursday, a similar event was held in Sagamu, Ogun State, on Wednesday.

Two people won N5 million each, five people won N1.million each, while hundreds of other customers won different prizes, including television sets, refrigerators, rechargeable fans, and 2KVA generators, among many others in Ogun State. 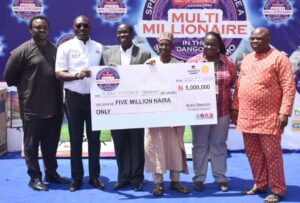 According to him, 20 winners were awarded cash prizes and consolation gifts at the venue while those in far-flung areas will be sent theirs after the event.

The Star prize winner, Salisu, said he was elated about his win and commended Dangote Cement for the initiative.

Other winners said they initially thought it was not real but realised that “with Dangote, only the best can happen”.

“We were doubtful initially but with the conviction that Dangote means well for the nation we decided to give the promo a try,” they said.

It would be recalled that the Principal Administrative Officer of the National Lottery Regulation Commission, Afam Ojeh, on Wednesday, in Sagamu, Ogun State, lauded the initiative of the management of Dangote Cement for consistently giving back to its teeming customers through its annual promo, where customers are winning huge sums of money and other lofty items.

Ojeh, who represented the National Lottery Regulatory Commission, enjoined the customers to appreciate the gesture of Dangote, saying the company, on a yearly basis, gives back to its customers and appreciates their patronage through the promo.

The representative of the National Lottery Regulation Commission, Mrs. Mandy Appiah, said Dangote is a Quality Brand with great concern for consumers to ensure a good quality of life for the people.