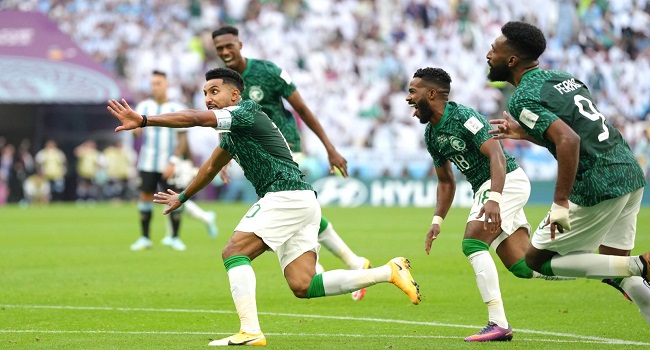 Saudi Arabia secured a shock 2-1 win over Lionel Messi’s Argentina in Group C of the Qatar World Cup on Tuesday.

Saudi Arabia took the lead in the second half of the game at the Lusail Iconic Stadium with brilliant goals from Saleh Al-Shehri and Salem Al-Dawsari.

Messi had given one of the pre-tournament favourites the lead from the penalty spot after a contentious VAR decision in the 10th minute but Saleh Al-Shehri levelled just three minutes into the second period to set up an almighty upset.

Al-Shehri squeezed in a low shot in the 48th minute while Al-Dawsari curled in a scorching strike from the edge of the penalty area in the 53rd minute to leave Argentina, one of the tournament favourites, looking shell-shocked.

The result ended Argentina’s 36-game unbeaten run, stretching back to defeat against Brazil three years ago.

La Albiceleste last lost their opening World Cup group game in 1990 – against Cameroon – but they went on to reach the final where they lost to Germany.

The two-time World Cup champions next face Mexico on Saturday, where victory is vital if they are to have any chances of progressing.

Argentina need at least a point to avoid throwing their hopes of progression into jeopardy.

Saudi Arabia will face Poland the same day and a win would all-but seal their progression to the knock-out stages, and most likely as group winners.

Buhari grieves over loss of 76 in Anambra boat accident

Amaechi to Osinbajo, Lawan: Let’s unite for Tinubu’s victory in 2023