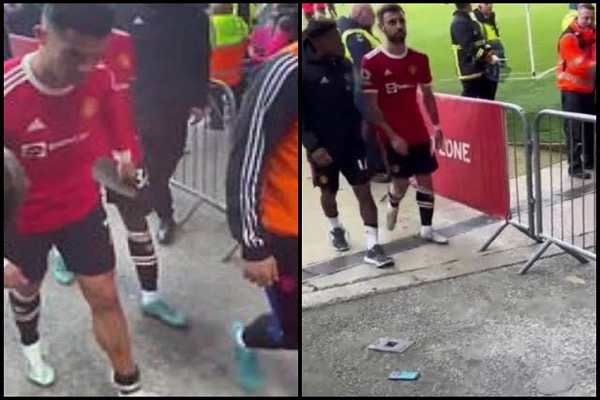 Portuguese star, Cristiano Ronaldo, has been fined £50,000 and handed a two-game suspension by the Football Association (FA) for smashing an Everton supporter’s phone.

Ronaldo, who has had his contract terminated by Manchester United, was charged with “improper and/or violent” conduct by the FA following the incident at Everton in April.

The FA, in a statement on Wednesday, said: “Cristiano Ronaldo has been suspended for two matches, fined £50,000 and warned as to his future conduct for a breach of FA Rule E3.

“The forward admitted that his conduct after the final whistle of the Premier League game between Manchester United FC and Everton FC on Saturday 9 April, 2022 was improper.

“An independent Regulatory Commission found that his conduct was both improper and violent during a subsequent hearing, and imposed these sanctions.”

The ban means Ronaldo would be suspended for two games if he joins another Premier League club, with Chelsea and Newcastle both linked with a move for the 37-year-old player.

Ronaldo issued an apology on Instagram when the incident occurred, saying: “It’s never easy to deal with emotions in difficult moments such as the one we are facing.

“Nevertheless, we always have to be respectful, patient and set the example for all the youngsters who love the beautiful game.

“I will like to apologise for my outburst and, if possible, I will like to invite this supporter to watch a game at Old Trafford as a sign of fair-play and sportsmanship.”

Ronaldo is in Qatar preparing for Portugal’s World Cup opener against Ghana on Thursday.