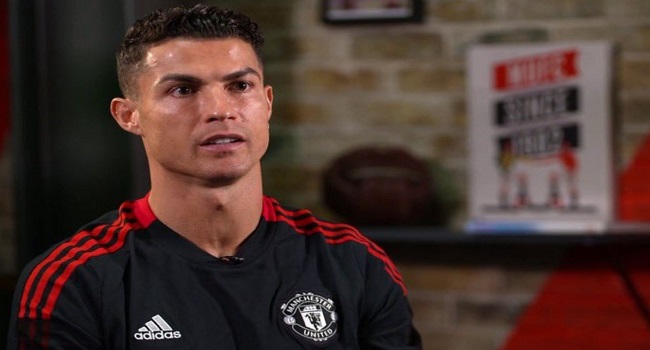 Manchester United forward, Cristiano Ronaldo, says he would be happy if Arsenal win the Premier League at the end of the 2022/23 season.

Arsenal are currently at the top of the Premier League with five points clear of second place Manchester City.

Speaking in an interview with Piers Morgan on TalkTV, Ronaldo said: “Manchester first, and if not, Arsenal is a team that I like to see play.

“I like the team. I like the coach. I think they have a good team. And if Manchester United don’t win the Premier League, I will be happy if Arsenal do.”

Speaking about Argentine superstar, Lionel Messi, the former Real Madrid forward, said: “Amazing player is magic, top… As a person, we share the stage [for] 16 years, imagine, 16 years. So, I have great relationship with him.

“I’m not [a] friend of him in terms of, a friend is the guy who was with you in your house, speaking on the phone, no, but it’s like a team-mate. He’s a guy that I really respect the way he always speak about me.”

On the longevity of his career and whether he could still play top-flight football at 37-year-old, Ronaldo said: “I want to play two years more, three years more. So two or three years maximum. I want to finish [at] 40. I think 40 will be a good age.

“But I don’t know, I don’t know the future. Sometimes you plan one thing for your life and as I told many times, life is dynamic. You never know what’s going to happen.”

Ronaldo, while speaking about support from former Manchester United manager, Sir Alex Ferguson, said: “I don’t speak with him [since] one month ago, but he’s always on my side. He always understands me. He knows that, he knows better than anybody that the club is not on the path they deserve to be. Everyone knows.

“The people who don’t see that is because they don’t want to see. The fans, they are always the answer, and the passion for the game. Manchester belongs to the fans, but they should know the truth. The infrastructure, they are not good. They should change.”