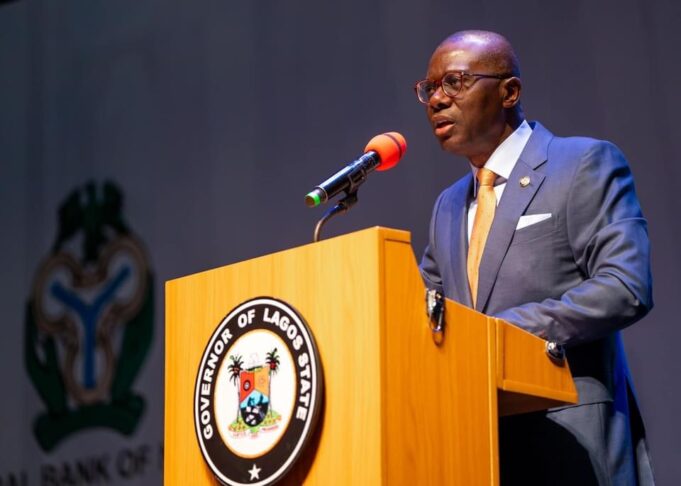 The governor said the state budget has also increased to about N1.7 trillion.

Sanwo-Olu made the disclosure on Monday while speaking at a roundtable organised by the Business Council for International Understanding (BCIU) in New York, United States on the sidelines of the 77th session of the United Nations General Assembly.

According to a statement issued on Tuesday by his Chief Press Secretary, Gboyega Akosile, the governor, who cited landmark developments in transportation, said the Red Line and Blue Line rail projects were on track to be commissioned by the end of the year.

The rolling stocks for the Red Line, which his administration started, he said, are on the way to Lagos State, noting that work was ongoing as scheduled on the stations.

While speaking on opportunities in water transportation, Governor Sanwo-Olu said from seven ferries, the state’s fleet has risen to 21 apart from many others run by private operators.

He said many of the 15 jetties being built by the state government were ready for commissioning, stressing that the aim was to have an integrated urban transportation system, strengthened by a strategic road.

The governor said the state government has concluded plans to build an Infectious Diseases Research Centre to tackle health challenges, such as COVID-19.

“Over 1000 school projects have been completed and we have introduced technology to make teaching and learning an exciting experience.

“We are seeing the results. We used to have about 36% pass in School Certificate Examinations; now we have about 80%.

“We are opening brand new schools and introducing technology by giving teachers tablets to aid their job,” Sanwo-Olu said.

The governor, while speaking on the 6,000km fibre optic cable being laid around the state, said the first phase of 3,000km was almost completed.

This, he said, would aid faster and cheaper internet connectivity, thereby boosting service in hospitals and schools, besides boosting the impressive activities of the youth in the tech ecosystem.

On security, Sanwo-Olu described Lagos as “the safest state in Nigeria”, adding that small businesses were being supported with grants just as he said the youth and women were being encouraged.

The governor, while speaking on challenges such as refuse disposal, said about 4000 metric tons were being generated daily.

This, he said, should attract investors, who are willing to turn waste to wealth in the state.

“There are also challenges in water, power and other sectors, which are awaiting investors,” Sanwo-Olu said.

He said many “people who have returned from Lagos have spoken of how they no longer recognize the state because of the developments taking place there. He is of the view that the Governor has done well “because good governance is about providing services.”

“You can be the ambassador of the private sector to the Federal Government, providing an enabling environment for manufacturing, agriculture and technology, which are drivers of diversification,” McCulley added.