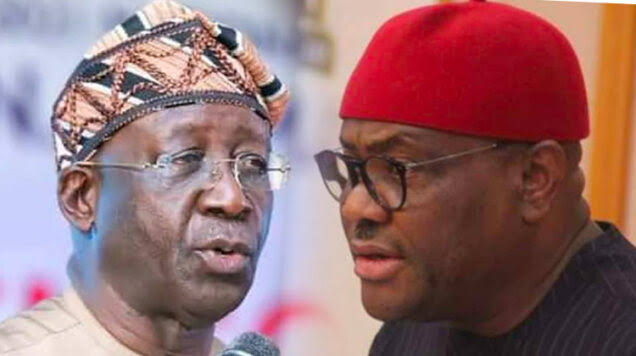 Governor Nyesom Wike of Rivers has accused the National Chairman of the Peoples Democratic Party (PDP), Dr. Iyorchia Ayu, of being corrupt.

The governor spoke on Friday in Port Harcourt during a live interview programme.

His words: “Ayu is corrupt. Quote me. I am a lawyer and I am the governor of Rivers State. Ayu collected N1 billion in Lagos.
“He told one of the PDP presidential aspirants before the primaries that the governors were not ready to fund the party.
“I know how the money was arranged and those involved in packaging the money. He collected the N1 billion. Let him come out to tell Nigerians it is not true and I will reveal more.”

Wike, who was one of the presidential aspirants, stated that Ayu manipulated the process.

The governor accused the national chairman of lobbying other presidential aspirants to step down for the eventual winner, Atiku Abubakar.

Wike stated that the opposition PDP is not serious to win the 2023 Presidency with its arrogance.

Wike also stated that some party leaders have shared critical positions in the event that Atiku wins in 2023.

According to him, Ayu wants to be the Secretary to the Government of the Federation (SGF).

“Some people have been given positions as we speak. Ayu wants to become the SFG. Someone has been promised Senate President. These are things happening in the party that we can’t say in public,” Wike said.

Why PDP must stop National Convention, by Secondus