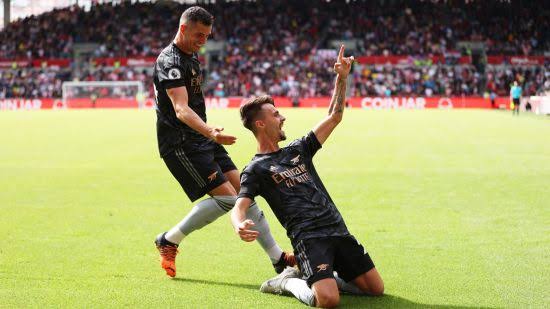 Arsenal returned to the top of the Premier League as the Gunners secured a 3-0 win over Brentford on Sunday.

Fabio Vieira, making his first Premier League start in the absence of the injured Martin Odegaard, got his first goal for the club as he rifled a stunning effort in off the post from 25 yards out (49) to cap a commanding victory for Mikel Arteta’s men.

The Gunners’ last visit to the Gtech Community Stadium ended in a dismal 2-0 defeat on the opening day of last season but on this occasion they were totally dominant, the victory underlining their recent improvement and sending them a point clear of Manchester City and Tottenham at the top of the Premier League table.

Arsenal made Premier League history in stoppage time, sending on academy player Ethan Nwaneri, who only turned 15 in March, to become the youngest-ever player to feature in the competition.