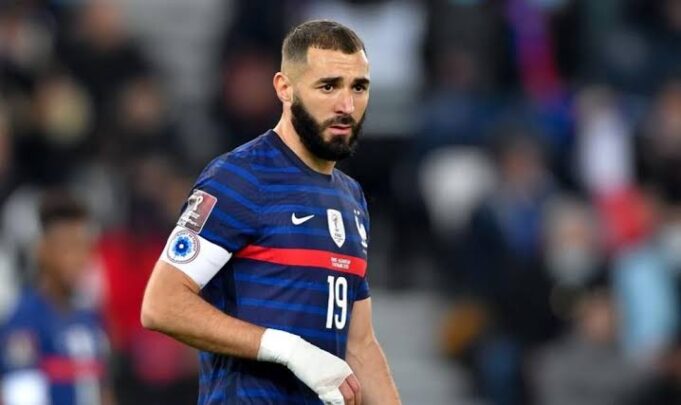 France striker, Karim Benzema, has been ruled out of the 2022 World Cup in Qatar after tearing a muscle in his left thigh.

Benzema was forced to leave the defending champions’ training session early after suffering the injury in training on Saturday.

The 34-year-old Ballon d’Or winner was taking part in his first full training session with Les Bleus when he had to come off after feeling some pain in his left thigh.

Speaking on the development, the French Football Federation (FFF), in a statement issued on Saturday night, said: “Karim Benzema is out of the World Cup.

“After hurting the quadriceps on his left thigh the Real Madrid striker is forced to give up on taking part in the World Cup.

“He went for an MRI scan in a hospital (clinic) in Doha, which unfortunately confirmed a tear.”

Benzema wrote on Instagram: “In my life I have never given up but tonight I have to think about the team, as I have always done, so reason tells me to leave my place to someone who can help our group make a good World Cup.

“Thank you for all your messages of support.”

In his reaction, France coach, Didier Deschamps, stated: “I am extremely sad for Karim who had made this World Cup a major objective.

“Despite this new blow for the French team, I have full confidence in my group. We will do everything to meet the huge challenge that awaits us.”

Since winning the Ballon d’Or last month, Benzema has played fewer than 30 minutes for Madrid after coming off the bench in a Champions League game against Celtic.

Benzema was France’s top scorer at the 2014 World Cup but did not play in France’s victorious 2018 World Cup campaign.

Deschamps recalled him for last year’s European Championship, where he was France’s top scorer with four goals.

Forward Christopher Nkunku was injured just minutes before the end of the team’s previous training session on Tuesday evening and has since been replaced in the squad by Randal Kolo Muani.

However, without Benzema, France still have a strong attack to face Australia, Denmark, and Tunisia in Group D of the World Cup in Qatar.

They are likely to start with Olivier Giroud as the central striker, flanked by 2018 World Cup star, Kylian Mbappe, and either Barcelona’s Ousmane Dembele or Antoine Griezmann.

Giroud has scored 49 goals for France, Griezmann has 42 and the 23-year-old Mbappe already has 28.

Dembele has also been in fine form for Spanish league leaders Barcelona this season.

Deschamps has until Monday – the eve of the Australia game – to call up a replacement for Benzema to his 26-player squad.

Patient dies after car runs over him at Jos teaching hospital