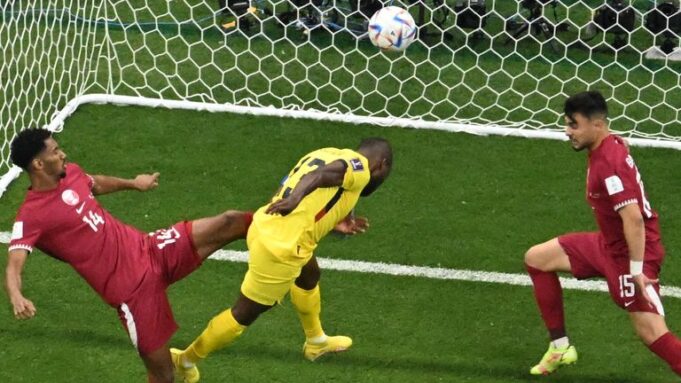 Qatar, on Sunday, became the first host nation to lose the opening game of a World Cup as Ecuador kicked off the tournament with a dominant 2-0 win.

After months of controversy leading up to the tournament, there there was no respite on the pitch for the hosts as they were comprehensively outplayed throughout their first-ever World Cup match.

Having seen a third-minute header ruled out for offside, Ecuador captain, Enner Valencia, wrote his name in the history books when he scored the first goal of Qatar 2022 from the penalty spot (16) before he took his tally of World Cup finals goals to five with a brilliant headed second in the 31st minute.

Ecuador took their foot off the gas in the second half yet Qatar failed to muster any kind of response as Gustavo Alfaro’s side started their World Cup adventure with an assured victory and seventh consecutive clean sheet to move top of Group A.

Qatar have become the first host nation to lose their opening game at that edition of the World Cup (W16 D6 before today).

Ecuador have however kept a clean sheet in each of their last seven matches in all competitions, with Argentina’s Julian Alvarez the last player to score against them back in March.

Ecuador scored twice in the first half of a World Cup match for the first time. This is the second time in their four appearances at the World Cup they have won their opening match, with the other also being 2-0 (against Poland in 2006).

Ecuador’s opener was the first time in World Cup history that the opening goal at a single edition of the tournament was scored from the penalty spot.

Atiku: I’m not bothered on Clark, Ortom’s endorsement of Obi