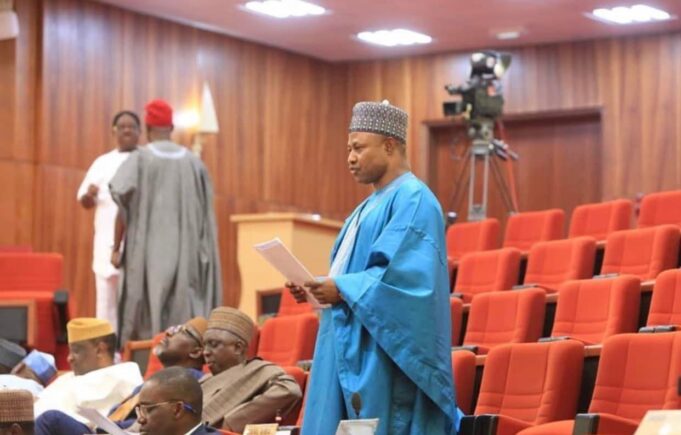 The gubernatorial candidate of the All Progressives Congress (APC) in Kaduna State, Senator Uba Sani, has said that he is the only senator that has two bills that have been signed into law in the 9th Senate of the Federal Republic of Nigeria.

The lawmaker said that he has sponsored 31 bills and seven of them have been passed by both the House of Representatives and the Senate, waiting for the president’s assent, adding that “and by the Grace of God, I will ensure that three or four of these bills are assented to before I leave the Senate.”

Senator Sani, who represents Kaduna Central Senatorial District at the Upper Legislative Chamber, said that the Peoples Democratic Party (PDP) gubernatorial candidate had spent eight years in the House of Representatives but had never sponsored a bill or moved a motion throughout that period.

The legislator further said that the New Nigerian Peoples Party (NNPP) candidate has moved a few motions in his four years as senator but not a single bill to his credit.

The gubernatorial candidate made these disclosures when he addressed the Political Committee of the Kaduna chapter of the Nigerian Labour Congress (NLC) on Friday.

He further said that all his 31 bills, including the ones that have been assented by President Muhammadu Buhari, centre on people’s welfare, especially the Bank and Other Financial Institutions Act (BOFIA) amendment Law which focuses on financial inclusion for the downtrodden.

Senator Sani said that 70% of adults in Northern Nigeria are unbanked and this partly explains the high level of poverty in the area, adding that that is why “I included a clause in the BOFIA bill, mandating anyone that is 18 years and above should be financially included.”

The senator also said that the amendment Bill to the Asset Management Corporation of Nigeria (AMCON) Law is aimed at instituting justice and equity as well as ensuring transparency.

“In 2009, when banks were going down because of the global economic recession, Nigerian government brought out N4.7 trillion to buy bad loans from the banks.

“What it means is that individuals borrowed money from the banks to the tune of N4.7 trillion, and the banks themselves were going down and this will affect the entire economy,” he said.

Sani recalled that AMCON was created to take over those loans and it paid  money to the banks in order to keep them afloat and AMCON was mandated to recover that money.

“But when I came into the Senate in 2019, I looked at the list and realized that 350 Nigerians were responsible for the N3 trillion debt. And who are these Nigerians?

“Most of them have houses in America, in the United Kingdom and Dubai. Some of them even had private jets,” the gubernatorial candidate disclosed, adding that about 2,000 Nigerians were responsible for the remaining N1.7 trillion debt.

Senator Sani said that what these figures show is that Nigerian taxpayers money was used to save some banks and AMCON has been unable to recoup this money from some rich people, who seem to be above the law.

According to him, it is unacceptable for few elites to live off the commonwealth of the nation and the practice is also undemocratic, adding that “I kept complaining in the senate and saying that we need to amend the AMCON Act.”

The legislator then asked AMCON officials what the impediments against the recovery were and they said that most of the debtors are rich and powerful people who frustrated their efforts with endless litigations.

The gubernatorial candidate said that he discovered that most of the collaterals that these bigtime debtors pledged before taking the huge loans, were properties or assets that were less in value to the loans that they collected.

“The total loans against their names, like I said earlier, was N4.7 trillion but the value of their assets was just N700 billion. This means that there was insider trading. And most of these collaterals are assets located in their villages and towns,” he said.

Sani, who is the Chairman of Committee on Banking, Insurance and Other Financial Institutions, said that he amended the AMCON Act, by inserting a clause that allows for asset tracing, which means that AMCON can trace any of the debtors’ houses that is located in any part of the country, irrespective of the one that they pledged as collateral, and seize them.

“Those debtors have mansions in Abuja but they gave the houses in their villages as collaterals. As we are speaking, Mr President has assented to the amendment on 31st November 2021. Today, I was told that because of that amendment, AMCON has recovered N1.5 trillion,” he disclosed.

According to him, the money will be channeled to Micro, Small and Medium Enterprises (MSMEs) in Nigeria and the owners can access the loan with their Bank Verification Numbers as collaterals.

“That is why we have been given loans,” he added.