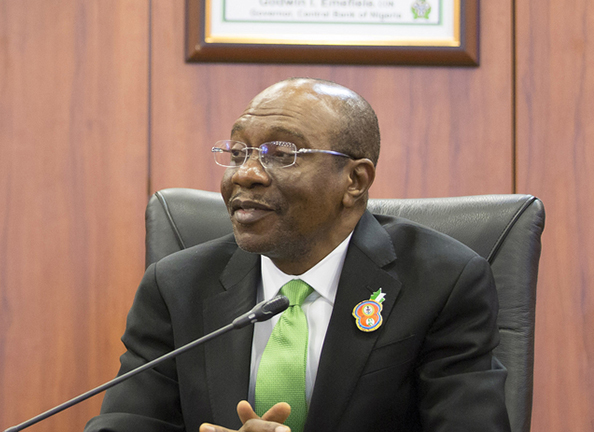 The Governor of the Central Bank of Nigeria (CBN), Godwin Emefiele, says with the introduction of the redesigned naira notes, no individual or organisation will be allowed to withdraw huge cash without being interrogated by relevant anti-corruption agencies.

Emefiele said this while fielding questions from State House correspondents after the unveiling of the redesigned naira notes of N200, N500, N1000 by President Muhammadu Buhari in Abuja on Wednesday.

The CBN Governor said with the redesign of the naira notes, the apex bank would ensure full implementation of the cashless economic system across the country.

”We will insist that cashless would be nationwide. We will restrict the volume of cash that people can withdraw over the counter.

”If you need to withdraw large volume of cash, you will fill uncountable forms. We will take your data, whether it is your BVN, your NIN so that enforcement agencies like EFCC or ICPC can follow you and be sure that you are taking that money for good purpose.

”We have to work as a country, Nigeria is the biggest country both in population and economy in Africa and we have to ensure that we do things the right way that also positions us as leader in Africa and one of the leading countries in the world.

”We must do things right and I think it would start from today,” Emefiele stated.

He said many countries, especially the advanced ones have far gone cashles, stressing that Nigeria must not be left behind.

The CBN boss added: ”In other countries you will find, say in the US, if you want to withdraw US$10,000 from the counter, you will be interrogated, you will fill numerous forms, they will even track the use of that US$10,000 cash that you are withdrawing.

”Or you want to withdraw £10,000 from the counter, they will refuse and if you insist then you will fill forms.

”The problems we have had in the past is that we say this is a cash economy.

”There is no economy that is inbuilt thinking that it has to be a cash economy.

Emefiele further dismissed the assertion that the redesign of the naira notes was targeted at some individuals, including politicians, saying: There is no need for anybody to think that this programme is targeted at anyone.

”Like you heard the President speak in the chambers. He said that this discussion to redesign and reissue this currency started earlier in the year.

”We took painstaking efforts in looking at the pros and cons and the reasons when and why it should be done. And the President, in his wisdom, decided that yes, it must be done,” he added.

El-Rufai: Our goal is to send bandits to their Creator