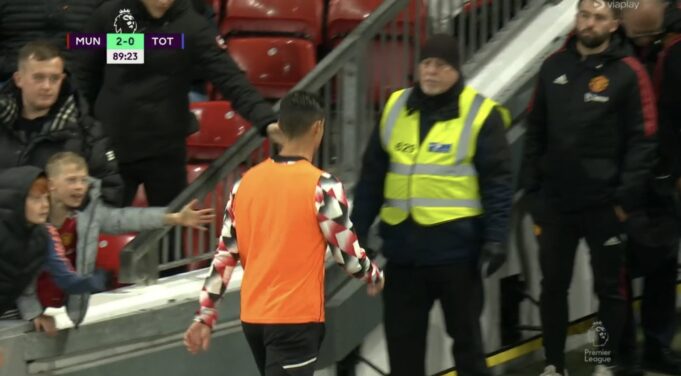 Ronaldo said he felt “provoked” by Man United manager, Erik ten Hag, after he refused to come on during the match.

The Portuguese star left Old Trafford before full-time in United’s 2-0 victory over Tottenham in October.

Unused substitute Ronaldo was seen walking down the touchline and up the tunnel in the closing stages of the match.

However, the former Juventus forward, in an interview with Piers Morgan on TalkTV, said he believes Ten Hag does not respect him in the way he deserves, adding that the punishment he faced was too harsh.

The 37-year-old player, who also spoke on Ten Hag’s refusal to bring him on in the 6-3 defeat at Manchester City earlier in October, said: “You don’t put me on against Manchester City because of respect for my career and you want to put me on for three minutes against Tottenham? It doesn’t make sense.

“I think he did it on purpose. I felt provoked not only because of that game, but before. He doesn’t respect [me] the way I should deserve.

“But it is what it is. This is why probably, the game against Tottenham, I left.

“I will be honest with you, it’s something that I regret, leaving the stadium. Probably, or maybe no, I don’t know.

“It’s difficult to tell you 100 per cent but let’s say I regret, but in the same way I felt provoked by the coach.

“A coach to put me in three minutes in a game [is] not allowed for me. Sorry, I’m not that kind of player. I know what I can give to the teams.

“Don’t tell me that the top players, the guys who want everything, the key players will play three minutes. Come on, this is unacceptable.

“After what they keep saying before, that they respect me. For me it was not respect, this is why I take this decision I regret.

“The coach didn’t have respect for me. So this is why the relationship, it’s in that way. He keeps saying in the press that he come to me, he like me blah, blah, blah. But that’s only for the press. One hundred per cent.

On leaving before the end of United’s pre-season game against Rayo Vallecano at Old Trafford in July, Ronaldo said: “Me and eight players [left], but they mentioned only my name. Last year, many players did the same. In that game, eight players do the same but they only speak about the black sheep, which is me.

“I completely understand, okay, it’s done, I apologise to the coach and for me, the chapter was closed.”

Speaking about his relationship with manager Erik ten Hag, Ronaldo said: “I understand that in a new job [you try to make an impression.] Manchester was so bad in the last five years that they should clean the house, let’s say it in that way.

“But the way they approach, the way the press make this so big. I really understand in the beginning because I didn’t do the pre-season, I don’t start to play, but going more further than that.

“Other things happen that people, they don’t know. And I’m not hiding that the empathy with the coach is not good. I’m honest.”

NNPC generates N203bn from sales of petroleum products in one month