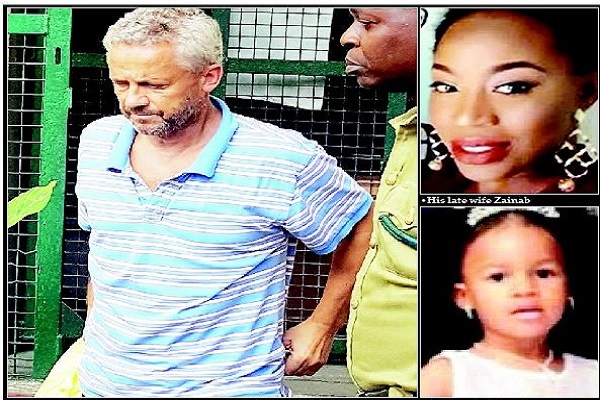 A Lagos High Court in Igbosere, on Friday, sentenced a Dane, Peter Nielsen, to death by hanging for killing his wife, Zainab, and daughter, Petra.

Nielsen, 54, was convicted by Justice Bolanle Okikiolu-Ighile on 2-count charge of murder brought against him by Lagos State Government. He was sentenced to death on both counts.

In a five-hour judgement, Okikiolu-Ighile held that oral and documentary evidence before the court showed that prosecution proved beyond reasonable doubt that Nielsen smothered his wife and daughter.

“This is one of the cases of domestic violence.

“The DNA analysis of nail scraping brought out the assailant of Zainab.

“Zainab tried so much to defend herself. The evidence shows that Peter Nielsen killed his wife and daughter.

“There is evidence before the court that there is a fight between the defendant and his wife,” the judge held.

She held that Prosecution Witnesses (PW5 and PW6) testified that they heard Zainab calling Mimi (one of the girls living with the couple) for help and they heard Zainab telling the defendant to check her phone but he kept hitting her head.

“The act of the defendant shows that he suffocated his wife and daughter.

“Peter has always domestically abused his wife which was shown in the police extract from Ikoyi Police Station.

How man trafficked wife for prostitution in Mali, sold son

“She didn’t know that her marriage to the defendant was void abi nitio because Peter was already married in Denmark.

“You are found guilty of murder of Zainab and Petra. I hereby pronounce that you Peter Nielsen be hanged by the neck till death. May God have mercy on you,” she held.

He, however, pleaded not guilty to the offence upon his arraignment, following which trial commenced.

Testifying before the court, a Consultant Pathologist, Prof. John Obafunwa, disclosed that Zainab and Petra died of head injuries and asphyxia (or suffocation) that were not self-inflicted.

Obafunwa said the post-mortem examination of Zainab’s corpse suggested that she was killed when her nose and mouth were forcibly closed which deprived her of oxygen.

“She had also suffered bruises around her head which were consistent with blunt force trauma that were not enough to cause any fracture. Evidence showed that the deceased struggled to free herself from her killer’s grip using her hands and nails.

“The result of a DNA analysis of Zainab’s nail clipping revealed the presence of her DNA material and that of an individual described as Peter,” the witness added.

The prosecution team led by Ms. Titilayo Shitta Bay concluded its case against Nielsen on September 20, 2019. The defendant later filed a no-case submission arguing that the prosecution had failed to link him with the alleged deaths.

In his no-case motion, Nielsen argued that a missing piece of critical evidence was destroyed during the burning down of the Igbosere High Court.

The silk argued that the nightgown the woman wore the night she was killed could no longer be found in the court’s record due to the burning of the court by hoodlums who hijacked the October 2020 #EndSARS protest.

He said substantial justice could not be done in the absence of the exhibit.

However, in her ruling on the no-case submission, Justice Ighile held that both prosecution and defence have called witnesses and tendered exhibits which were not premised on the said exhibit.

The judge consequently ordered Nielsen to open his defence while dismissing the no-case motion.

In his defence, Nielsen affirmed his testimony that he did not kill his wife and daughter. He said he only found them dead after waking up from his sleep on the morning of the incident.

He added that all his efforts to revive them were abortive.

“I remember that Thursday, 5th of April, 2018, was an Easter vacation day. When I woke up, I was looking for Zainab and Petra from the balcony overlooking the field in the Estate,” Nielsen said.

Why Nigerians want Osinbajo for 2023