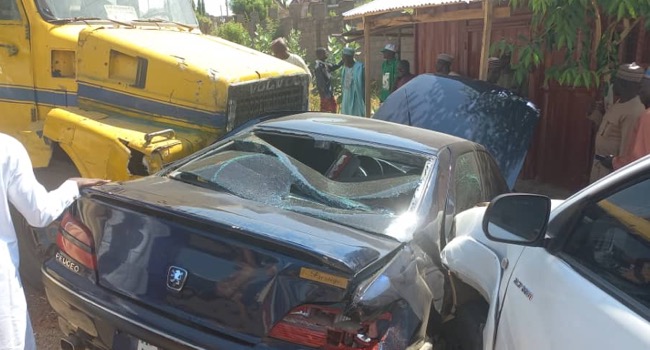 No fewer than two policemen were injured after a truck crush two vehicles in the convoy of Adamawa State Governor, Ahmadu Fintiri, on Saturday.

It was gathered that the incident occurred shortly after the governor, who escaped unhurt, and some of his commissioners were about to leave a wedding ceremony at Agga Mosque in Dougirei highbrow area of Yola, the Adamawa State capital.

It was learned that the truck rolling down the steep road crushed two vehicles in Fintiri’s convoy, leaving two policemen identified as Inspector Madu and Sergeant Isa injured.

A resident, identified as Muhammad Dougirei, disclosed that the truck ran toward the governor’s convoy at a high speed, suggesting that the driver had lost control of the truck.

READ ALSO: Court jails man for possession of 101 PVCs, another arrested with 367 cards

Dougirei stated that the truck driver managed to steer the truck away from the direction of the vehicle conveying Fintiri to hit the official vehicle of the Permanent Secretary, Political and Security Affairs at the Government House, and a Peugeot 406 conveying a video journalist and the two injured policemen.

He added that the truck driver and another young man were later arrested by the police.

A security source revealed that the injured Inspector was still lying unconscious at the Intensive care unit of the Specialist Hospital, while the Sergeant had regained consciousness.

Meanwhile, the spokesman of the Adamawa State Police Command, DSP Sulaiman Nguroje, has yet to react to the incident as of the time of filing this report.

Tinubu to Buhari: You’re leader who belongs to nobody