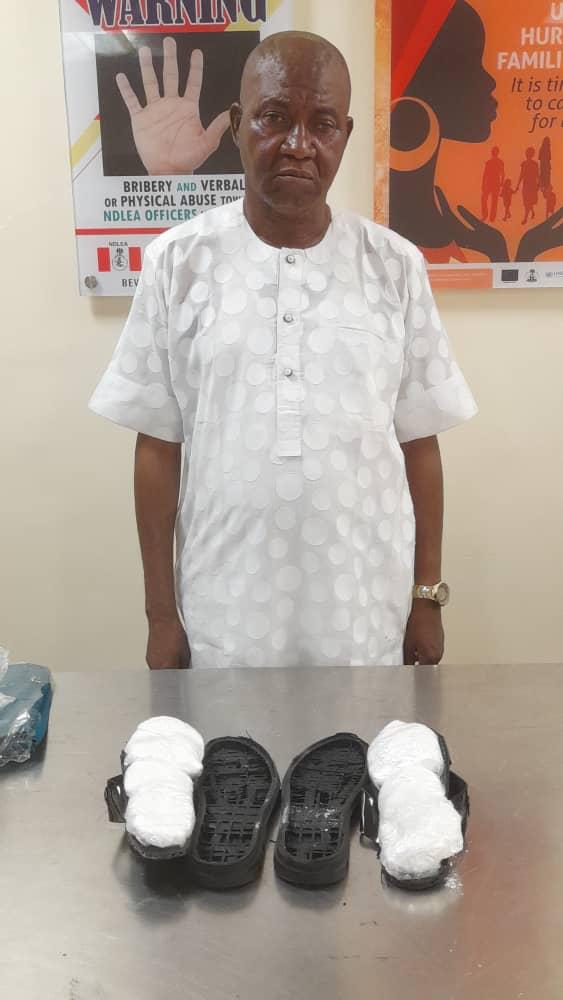 The operatives of the National Drug Law Enforcement Agency (NDLEA) have arrested a 56-year-old trafficker, Lawal Lateef Oyenuga, who was on a mission to deliver 400grams of cocaine concealed in a pair of palm sandals in Jeddah, Saudi Arabia, at the Murtala Muhammed International Airport, Ikeja, Lagos State.

The spokesperson of the anti-drug agency, Femi Babafemi, disclosed this via a statement issued on Sunday.

Babafemi noted that the NDLEA operatives intercepted Oyenuga at the Lagos airport on Thursday with a pair of black palm sandals packed in the luggage he was going with to Jeddah, Saudi Arabia via Addis Ababa on an Ethiopian Airways flight.

He stated that a thorough examination of the sandals revealed they were used to conceal two parcels of cocaine weighing 400 grams.

The NDLEA spokesman said Oyenuga claimed he was recruited to traffic the drug by Gbolahan, popularly known as Teacher. 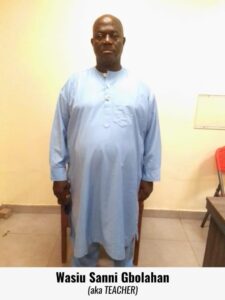 Babafemi disclosed that Oyenuga said he was first given some pellets of cocaine to swallow but when he couldn’t do that, he was given the ones concealed in the palm sandals.

He added that the suspect said he resorted to the criminal trade to raise money to pay an examination fee for his daughter who is in Senior Secondary School class 3.

The NDLEA spokesperson noted that the agency’s database revealed that Gbolahan (Teacher) has been linked to some previous attempts to traffic cocaine to Saudi Arabia and Dubai, the United Arab Emirates (UAE).

“He was earlier named as the one who recruited a BRT driver, Bolajoko Muyiwa Babalola for Lagos socialite and owner of Adekaz Hotels, Alhaji Ademola Afolabi Kazeem (a.k.a Alhaji Abdallah Kazeem Muhammed) to traffic drugs to Dubai.

Bolajoko was arrested on 27th June while taking 900 grams of cocaine to Dubai while Ademola Kazeem was nabbed on Thursday 10th November, barely 10 days after he was declared wanted by NDLEA,” he stated.

Babafemi added that another follow-up operation led to the seizure of 1.10kg cannabis concealed in bottles of body cream going to Dubai on  September 9, noting that the actual owner of the consignment, Wordu Hopewell Chukwuemeka who runs a boutique business in Port Harcourt, Rivers State was arrested in the Garden City on Thursday, November 24.

The spokesman of the anti-drug agency said the NDLEA operatives attached to NAHCO import shed of the Lagos airport, on Tuesday, intercepted a consolidated cargo from Johannesburg, South Africa via an Airpeace Airline flight.

He disclosed that the cargo contained different items, including cloths, cereals, baby toys, drinks, and a set of two big black speakers, which were used to conceal 25 parcels of Loud variant of cannabis, with a gross weight of 5.5kg.

Babafemi stated that the anti-narcotics officers attached to the SAHCO export shed of the Lagos airport, on Tuesday, also intercepted a carton of food items used to conceal 500 grams of cannabis going to Dubai, UAE while the owner, Uzoma Kingsley, was promptly arrested.

Speaking on the arrests and seizures, the NDLEA Chairman/Chief Executive, Brig. Gen. Mohamed Buba Marwa (Retd), commended the officers of the agency for their professionalism in the discharge of their duties and the remarkable results that followed.

Marwa enjoined them and their compatriots across the country not to let down their guards as the nation approaches the festive season.

Watch the video below:

Army Commander to troops: Continue to kill terrorists without mercy